Breaking: 2024 5-Star Trentyn Flowers cuts his list of schools down to thirteen 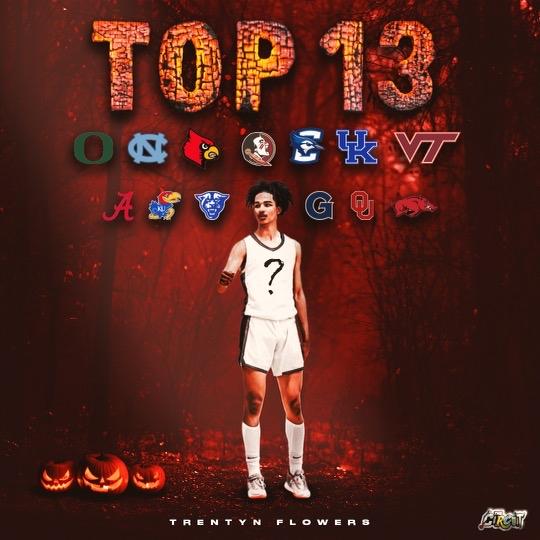 Trentyn Flowers, the 9th ranked prospect in our 2024 rankings has just announced the thirteen schools left in his recruitment. Flowers has been offered by over forty schools.

This upcoming high school season, Flowers will be attending Combine Academy (NC), where he will have the chance to showcase his talent on a national schedule.

In this interview Flowers breaks down each of the remaining schools that are involved in his recruitment.

Alabama: "Coach Oats and Coach Hodgson. Coach Hodgson has known me since 6th grade and as my game started maturing, he really took the time to get to know me and my family.  They consistently built a relationship with me and came to see me play during the live period. It's a great school; it was a no brainer to put them in there."

Kansas: "I have been talking to Coach Townsend since I was at Huntington Prep. They showed interest in me by coming to see me play multiple times during the live period. They were the national champs, and they are a really good team."

Georgia State: "Coach Hayes was the first person to offer me when he was at Xavier. He has always believed in me and what I can do with my game. He is basically family at this point. A lot of people might look at Georgia State and think it is just mid-major, but they made it to the tournament to play Gonzaga.  I want to be around great people and that is why they are on my list."

Georgetown: "Coach Nickelberry and Coach Pat are my guys. They do a great job reaching out to me and coming to watch me play. The unofficial I went on was a good time and the blueprint they have there is amazing. Coach Pat playing in the NBA is a coach that has been through it and played under an amazing coach in John Thompson."

Oklahoma: "I am taking an official this weekend. They are another school that has done a great job in my recruitment. They love the way I play and want to build something at Oklahoma. Buddy Hield, Trae Young, and Blake Griffin came out of there and they are looking for the next star. They think that could be me potentially."

Arkansas: "The whole staff is showing love; they talk to me every day. They watch me a lot and the feedback they gave me is amazing. They feel like I fit the mold of what they are trying to do. They like what I can do and want me to continue to expand on that. Coach Musselman is a great coach that has coached a lot of pros so I had to put them down for sure."

Virginia Tech: "Me and my family had a good time on the unofficial visit there. We got to see the culture and what they have building. It was cool to see Patrick Wessler there as a Combine alum. Coach Jones and Coach Young has done a great job recruiting me and feels like I can be a star one day.

Oregon: "Coach Altman and Coach Martin has stayed in good contact with my family and with my teammate this summer Kwame Evans and he ended up committing to Oregon. They said I could be a pro and has built a good culture and could be a good place for me when it becomes time."

North Carolina: "They took the time to watch me all throughout high school. I was able to go up there on an unofficial visit and had a great time. It was awesome being at the arena and thinking that guys like Michael Jordan have played here. It was kind of like a dream come true."

Louisville: "They watched me play twice during the live period and they felt like I could be a pro. They love how versatile I am and how I can play on and off the ball. With the coaching changes, when it became time I knew this was a school I wanted to include for sure."

Florida State: Being in the ACC and seeing how Coach Hamilton developed Scotty Barnes as a two-way big point guard was something I looked at with them. They did not want me to change my game at all and felt I already fit the mold. Coach Hamilton is a legend in basketball, and including them was a no-brainer.

Creighton: "They snuck in the last couple weeks. We talk about more things than just basketball. They liked the way I played and my IQ, and I felt like I did not have to change my game at all. I have nothing but great things to say about them.""

Kentucky: "Coach Cal and Coach Orlando have have recruited me just as long as any of these schools. They started recruiting me last year at Huntington Prep and every time Coach Cal sees me, he says I have improved. Everybody knows Kentucky's resume: a lot of #1 picks. They let their players play free, which really fits my playstyle. That is why I put them down."