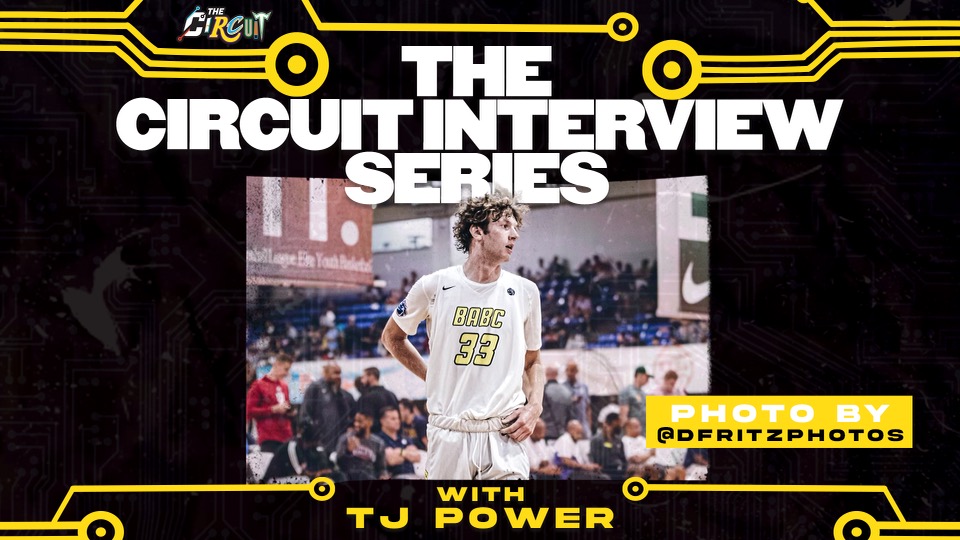 TJ Power has watched his recruitment take off this spring/summer, playing with BABC (MA) on the EYBL Circuit. The 6'8 dual forward is one of the premier players in the 2023 class.

Power recently cut his list of schools to down five. Duke, North Carolina, Virginia, Iowa, and Boston College made the cut.

In this in depth interview, I talk with Power about cutting his list of schools, this past grassroots season, and his upcoming senior season at Worchester Academy (MA)

Talk about this past grassroots season with BABC (MA)

TJ Power: "It was an exciting spring and summer, It's kind of how you want to go out. That summer is always a special time. There were a lot of 4-5 year guys on this team who deserve everything that's coming to them. Personally, being able to showcase my stuff on the highest level, especially down at Peach Jam. I wouldn't want it any other way."

Your game has shown so much growth over the past couple of months, What have you worked on the most?

TJ Power: "I think the number one thing is the mentality that I play with. Ive always been pretty skilled and I can shoot. I just think consistency was the next step and that just came with my confidence. I was playing more aggressive and had a better feel out there. I think that is when things started to take off for me".

What was your most memorable/favorite game from this grassroots season?

TJ Power: "We had a couple games in Kansas City where I played really well. It was kinda cool because both of them were 9:30 PM games, both were really close games. We played Seattle Rotary one night and we were down. I finished with 33 in the overtime win so that was big time. The next night we played Houston Hoops, I played really well in that game. I had 41 points and 15 rebounds and that's when things kind of took off. I think it was cool the way it happened in two late night games like that."

What did it feel watching your recruitment blow up after these two big games?

TJ Power: "It was rewarding, I have worked my whole life to get to this point and to see the recognition is always rewarding. I was in a really good spot with a lot of the schools that had been recruiting me and I still am with a few of them. It's not like it totally shifted everything but it's definitely cool to get some recognition from the historic programs. It was a cool experience.

You are going into your senior season at Worcester Academy, what are your personal and team goals for this upcoming year?

TJ Power: "We won the NEPSAC AA Championship last year, a really competitive league, so obviously are goals are to repeat that championship. I would even say take it to another level and win the National Prep Championship. We aren't ducking any smoke this year we are going to have a pretty tough schedule and play a lot of good teams but I have a lot of confidence in our team. We are pretty loaded and like minded so I think our expectations are going to be through the roof.

A few days ago you released your top five schools, what does it feel like getting closer to making your college decision?

TJ Power: " It's kind of relieving honestly. I had a lot of great options and it was super difficult that whole process of calling those schools and trying to trim them down. It's hard to nit pick about these schools because they are all great programs so it was just about what I liked at the five schools that I kept more than the other schools. Now that I am on the other side it is relieving and hopefully can block out the noise and dive deeper into these five schools."

Your top five of Duke, North Carolina, Iowa, Virginia, and Boston College, give a breakdown on each one of these schools and what they have been talking to you about during the recruitment process

TJ Power: Duke - "Duke is the more recent offer obviously but I visited there after Peach Jam for about two days and I loved it, it was a really pretty campus. My talks with Coach Scheyer have been the main reason that I have kept them in. What he has preached to me about being apart of a special group there with obviously two great recruiting classes and a lot of unselfish kids who share the ball. He wants me to lead the country in assists and three point makes which is right down my alley. The style of play, they play really fast and play aggressive which is kind of where my game is going. Then obviously the brand of Duke basketball is always hard to pass up when making these decisions."

TJ Power: North Carolina - "Similar situation, I visited them for about a day after Peach Jam and me and Coach Davis hit it off. He is really easy to talk to and he is a really smart coach. Just the way he talks about different strategies that they used last year in just his one year of being a head coach. I just like the way that program is changing a little bit with his approach and having a lot of versatile bigs who can really shoot and stretch the floor, I think that would really work for me. Then being on the big stage at UNC and playing for a national championship like they did last year have how they have a good chance to do this year."

TJ Power: Virginia - "Coach Bennett and I have a relationship and he is a really detailed coach which I really like. The player development there is the most impressive thing. They are always in contention and they are always winning which is a big deal. Just being able to develop under him for a few years would be great for getting me ready to play professionally."

TJ Power: Iowa - "Coach McCaffery and I have a great relationship. He has been recruiting me for a really long time and I have a couple friends down in Iowa who play there. I visited there last fall and I like the feel of that place and playing in the Big 10, it is all basketball country down there as far as the fan base. The style of play, a lot of shooters with confidence who move the ball and get up and down the floor so that is a good spot."

TJ Power: Boston College - "Obviously Coach Grant is a second year coach. From my talks with him I think I can tell the energy that he has for the program and the school has the back of that program. New facilities and kind of re-energizing that whole college basketball program and being able to play close to home is a unique opportunity that I think I will have to look at. They have some young guys there that I would like to play with. I think it could be pretty cool."

Do you have a timetable on when you will make your college decision?

TJ Power: " Probably mid-September. I don't have a date, I am just kind of aiming around then right now."

Do you have any plans on visiting some of these schools again before your decision?

TJ Power: " I am working on some dates, I haven't really solidified anything. I am not in a huge rush to get back out. I think it might be worth it to get back out to a few places."