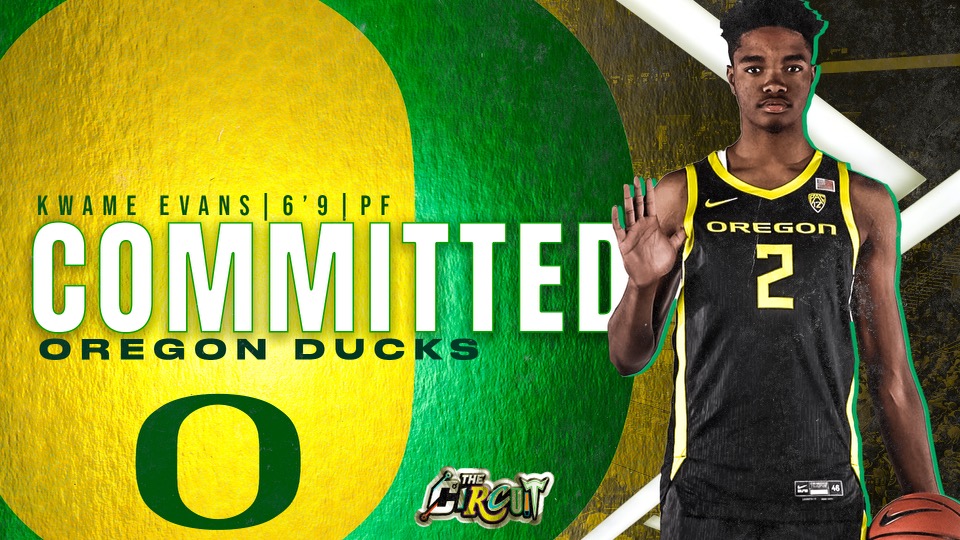 Evans, who chose the Ducks over schools such as Kentucky, Auburn, Arizona, and UCF, has the frame and skill to make an immediate impact at the college level.

Leading Team Durant to the semi-finals of this years Nike Peach Jam, Evans will have another full HS season at Powerhouse MVA (FL) to sharpen his game before attending Oregon.

Below is a full breakdown on Kwame Evans' game, how he will fit into Oregon's system, and how he performed this spring/summer.

Evans is a 6'10 PF with tons of length that he uses to his advantage. His long arms help him on both sides of the ball. Offensively it allows him to shoot over defenders and attack the glass hard for rebounds. It also helps him with finishing around the rim. Evans has great touch. Mini jump hooks and great footwork help him around the basket. Defensively, he can guard 1-4 and this is where his length helps him as well. Evans gets his hand into passing lanes, causing deflections and steals. He has the ability to grab a rebound, push the ball down the court himself, and make a play for himself or a teammate. While Evans is still putting it all together, I believe once he arrives on campus at Oregon, he will be more than ready.

What does he bring to Oregon as a freshman?

Once Evans gains muscle I believe that he will be college ready the minute he steps on campus. His overall skill set is one of a college player already. At the next level he will need to work on his shot selection but that comes with maturity. At the next level he will need to make shots which he can now. If he sticks to what he is good at such as rebounding, minimal dribbles to the rim, finishing, and defending multiple positions I believe that Kwame Evans can be very successful at the college level.

Over the course of this grassroots season, Evans made major strides in his game. Taking on a heavier role than what he had during the HS season at Montverde Academy (FL), Evans shined when needed the most. Evans helped lead Team Durant to the semi-finals of the Nike Peach Jam Championship. Evans averaged close to a double-double through four sessions and showed glimpses of his improved shot making abilities. He took on a leadership role with this years Team Durant (MD) and did what was needed to win. Some games he showed that he does not have to score the ball to make an impact. If Evans uses that same mind set at the next level, he can be very successful.