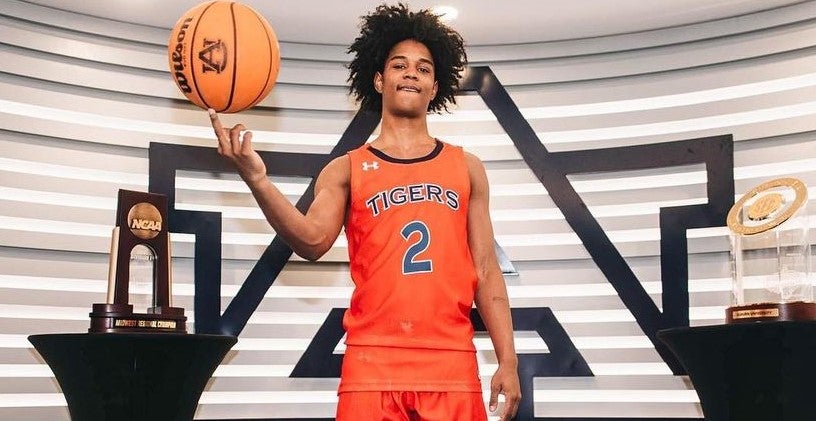 Holloway is the Tigers seventh highest recruit in program history and he looks to come in and make an immediate impact.

The real question is what does Holloway bring to the table?Below I give a full breakdown on his game and how he will fit into Auburn's system as an incoming freshman.

Holloway has continuously proved that he is one of the premier scoring point guards in the class of 2023. With the ball in his hands he is very crafty. He can create his own shot off the bounce with his tight handle and awareness. When attacking the rim, Holloway can really finish. Only standing at 6'0 he has to be smart and crafty with his finishes around the basket. Multiple times we have watched him absorb contact and finish through defenders. Being a smaller guard means you have to have a floater. Holloway has mastered it with either hand. His skill helps him produce the most on offense. Being able to knock down shots off or on the ball will help him tremendously at the next level. Passing the ball is another part of Holloway's game that brings him success. He uses his speed with the ball to get paint touches and kicks the ball out to  teammates for wide open shots. Holloways skill set will only improve in his senior season, helping him be fully prepared for his freshman season at Auburn.

What does he bring to Auburn as a freshman?

Holloway will have a role change I believe once he gets to Auburn his freshman season. During his high school seasons and grassroots seasons, he has been looked at for the main source of offense. At Auburn there will be guards with experience that will most likely play over him to start. When Holloway does touch the floor, he will be looked at to facilitate and makes plays for others. Holloway obviously will take shots when given to him but for him to impact the game and help Auburn win games I believe he will have to be more of a facilitator his freshman season. Now that will obviously change throughout his collegiate career because he has the skill set to score. His freshman season will determine the player he is. Setting teammates up for good shots, defending, and taking smart shots may be the role for Holloway his first season under Bruce Pearl. I do believe that he will explode some games and take on more of a scoring role, but for the majority of his freshman season he will have a significant role with passing the ball and scoring less than what he is used to.