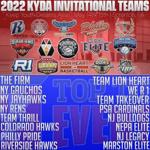 The KYDA Invitational was held at multiple sites in Scranton, PA. The yearly event didn’t disappoint. Some of the best teams and prospects throughout the country participated, including the Colorado Hawks, one of the best teams on the Adidas 3SSB circuit.

Baye’s physical tools were instantly on display. His length, athleticism, and mobility were huge factors throughout the weekend. The rim running forward showcased his versatility on both ends of the floor. He operated from the post but also faced defenders and made them pay with his shooting touch from outside. At one point in the game, he blocked a shot with his foreman. Consistency and staying engaged will be essential for Baye.

Derik has grown a few inches since the last time I saw him. He looked completely different after his first season at Montverde. At times, the game looks effortless to Derik. The versatile forward can get it done in the paint and from the outside. The combination of size and ability support his ability to keep possessions alive and finish with a soft touch around the rim. Derik's feel for the game and passing ability is extremely underrated. He’s almost impossible to double team. Shot selection will be the next step for Derik to take in his career.

Dylan has grown a few inches over the last few months. He gets to the rim effortlessly. Finding angles in the half-court is one of his specialties. As an ambidextrous finisher, defenses have to figure out which way to send him. He effectively created off the bounce. His feel in the half-court as a scorer and facilitator didn’t go unnoticed.

Boogie looked impressive Sunday. Boogie consistently knocked down shots from various spots on the floor. He balanced the floor and read defensives as creator and off the ball. I noticed his improved strength. He looked stronger compared to only a few short months ago. On the offensive, he picks his spots and has a good understanding of pace. His feel in the half-court was impressive, especially for his age. He attacks closeouts with one dribble side steps or a one-dribble pull-up. Developing into a full-time point guard will be tough for Boogie but showcasing his ability to run the offense will be what coaches are looking for.

Luke stood out daily with his ability to control the paint defensively and attack the rim offensively. Luke’s size, mobility, and length controlled the paint. I recognized he rarely fouls displaying good defensive fundamentals. His timing sets him apart. He’s the quarterback for the backline, which allows perimeter defenders to apply more pressure on the ball. Offensively he made it a point to attack the rim finishing with a number of dunks in traffic. Luke showcased his potential touch from the post but consistency will be key and along with extending his range.

The future Overtime Elite participant was a clear standout Saturday. The highly skilled wing has the size, skill, and ability to impact a game. He consistently connected from the perimeter. His shooting mechanics were steady throughout the game. He’s a tough match-up because of his ability to create off the dribble and get to the rim. Naas has the mentality is to crash the boards, not worrying about physicality at the level. As an underrated defender, he uses his length to disrupt opponents his the half-court. As he continues to develop his body and embraced the physical nature of the game it will benefit his development down the road.

Charlie O’Sullivan | 6’7” | F | 2025 - Southpaw who is learning to push the ball and trigger the offense. Very good rotation on his jump shot.

Mike Williams | 6’3” | G | 2023 - Team Thill - Athletic two-way guard who attacks defensive but is capable of connecting from the perimeter.